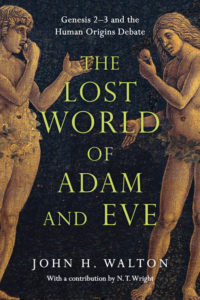 There is so much interest in this topic in the contemporary world around us that scholars like Walton bring fresh and welcomed insight into a curious generation. In a way, we are torn–we are tired of the expectation to constantly deny and ignore the scientific community on matters regarding the age of the earth and origins. Yet, we maintain our desire for significance and we hold on to our faith. Perhaps we don’t have to be torn. Walton states: “We also expect Genesis, read properly, to be compatible with the truths about our world that scientists uncover because both the world and the Word emanate from God.” Not that current scientific theories are correct by default, but we’ve got to seriously look at the text to see what it is claiming. Perhaps, as Walton puts forth in The Lost World of Adam and Eve as well as previous works, the opening chapters of Genesis do not speak to material, scientific origins.

As we approach Scripture, we always risk reading it through modern eyes. And, every time we read the Bible through our modern lenses, we risk imposing something onto the text that isn’t there. While I was taking an Old Testament introduction course a couple of semesters ago, Dr. Walton visited the seminary that I attend to give a lecture on Genesis 1. The day he arrived in Kentucky, my professor invited him to speak to our class and he reminded us all that, when it came to Israel and the Old Testament, God used what was already in place within the broader ancient Near Eastern cultural context. That makes sense! And, that is what he tries to uncover in this book. How would the ancient Israelites have understood the text? What is Scripture actually saying?

Every time we read the Bible through our modern lenses, we risk imposing something onto the text that isn’t there.

To answer these questions, Dr. Walton lays out 21 propositions (similar to the format of The Lost World of Genesis One) ranging from topics such as ancient Near Eastern literary motifs and imagery to the New Testament use of Adam and Eve. (Proposition 19–Paul’s use of Adam–is contributed by N. T. Wright!) Walton lays out an archetypal view of Adam and Eve. That is, they were real people in history, but in the text they represent all of humanity. Therefore, they were not necessarily the first humans. This archetypal view of Adam and Eve in Genesis 2-3 meshes well with Walton’s cosmic temple inauguration view of Genesis 1, laid out in The Lost World of Genesis One.

Walton states: “This reading of the biblical text has not been imposed on it by the demands of science, but science has prompted a more careful examination of precisely what the text is claiming.” The Lost World of Adam and Eve is another groundbreaking work which gives us more clarity about the ancient world and understanding of the ancient text of Genesis as we move forward with the discussion of origins, creation, Adam and Eve, etc., while trying to navigate the relationship between science and faith.

Pre-order this book at Amazon or IVP

See also my review of Four Views on the Historical Adam, in which Dr. Walton shares a condensed form of his archetypal view.

*An advance copy of The Lost World of Adam and Eve was provided free from InterVarsity Press with my promise to give an unbiased review.

← What Do Loving People And Tending Sheep Have In Common? What Saint Paul Really Said, N.T. Wright →